Zougla. What a word. It sounds like onomatopoeia for thick, cold gravy flopping onto a naked plate. It slides off my tongue smoother than jelly but has the auditory bite of a foreign curse word. Depending on the inflection you use, Zougla can convey a multitude of emotions. Celebratory. Tribal. Jovial. Angry. Comical. Without any context whatsoever, the versatility of Zougla gives it an appealing quality. Too unfamiliar for connotation, but too sensible to be gibberish. Use it to make a toast at a wedding. Use it as a nickname for your favourite beanbag chair. Use it as a safe-word. WIth Zougla, the possibilities are endless

But what does Zougla actually mean?

I got to page 3 of my Google search results before I gave up. There ends up being little to nothing on an actual translation. One of the first things I did find was pretty wild band called Bazooka who have an EP called Zougla.

Very interesting, to say the least.

There’s also a Greek television show with the same name. Hosted by someone with the very catchy name Makis Triantafyllopoulos. The blurb I found on WikiVisually talks about the show’s colourful history:

“The name Zougla means “jungle” in Greek. The show always features jungle-like scenery with a jeep, plants and huts […] During his first years of presenting, Triantafyllopoulos presented the show with his pet parrot, Fidel. Unfortunately Fidel died during a fire at the set.”

And while absolutely none of this is relevant to bathrooms or restaurants whatsoever, these sources were the only places that informed me that Zougla means “jungle.” (I guess it must be an English phonetic spelling of the actual Greek word).

It makes sense then, that the restaurant in Nanaimo is a Mediterranean grill. I’m sure there’s gotta be a jungle over in that part of the world somewhere.

As for the Zougla in Nanaimo, it’s a pretty fancy place to eat. Definitely out of my usual price range. I always know my bill is going to send me into cardiac arrest when they provide me with butter that looks like a snowflake. 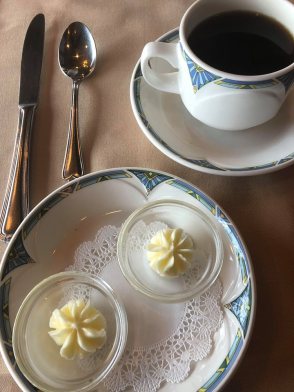 Zougla has a beautiful blue, white, and beige colour scheme that makes the place feel cool and comfortable. The air conditioning probably helps, too.

I felt bad about spilling sauce from my bacon wrapped prawns on the table, so I covered it up with a plate.  I don’t know if they have some sort of laundry service for this restaurant, but I can’t imagine it being very fun to replace these tablecloths after every customer.

The food here is fantastic. I had the Steak, Prawn & Vegetable Dinner Special. The meat was mouth-watering, and the hollandaise sauce on top was a great touch.

So what could I possibly expect from the shitter  to such a sumptuous restaurant? I’m always digging to find the dirt, even in the finest of establishments. In fact, I would argue that classier food-places deserve deeper dissection in the department of doody-denouement.

These guys couldn’t be completely clean. I would find something.

Before I could begin my investigation, I walked over to the wrong end of Zougla in search of the restroom.  Embarrassment burned into my cheeks when the host noticed my mistake and sent me the right direction.

I don’t know what it is, but whenever I’m in a food-establishment I perceive to be out of my monetary-league, I get nervous. I feel underdressed. I even start talking differently and using overly-polite expressions I don’t ever use. A strange fear of being found out permeates my behaviour. I feel like I’m going to be caught for being somewhere I don’t belong.

My psychologist says it’s reflective of my toxic self-hatred, but she’s probably a regular customer at Zougla, so what does she know?

Doing my best to hide my reddening face, I thanked the host, slapped on my scrutinizer shades, and snuck into the restroom. I made it my mission to spot any stains underneath all the sophistication.

The restrooms at Zougla are actually located near the entrance behind the front counter. On my way over, I notice a painting hanging in the area. There’s gotta be something funny about this painting. It looks too perfect.

Nope. Just a stylish piece of art hanging neatly on the wall. It even matches the colour scheme of the restaurant. Well then. I guess there’s nothing suspicious here.

Unfortunately, in my altered state of being mortified by the civility and courtesy of the host, I didn’t snap a photo of the door signage. I was terrified of him walking by and thinking I had never seen a men’s room before, snapping photos like a toilet-tourist, (which I kind of am).

Inside, I find a surprisingly typical layout. It’s spacious enough for a moderate level of traffic, and it doesn’t stink. But what about the floors?! The floors must be Zougla’s folly! Er, no. They don’t seem to have any film or drippage anywhere. Hmph. 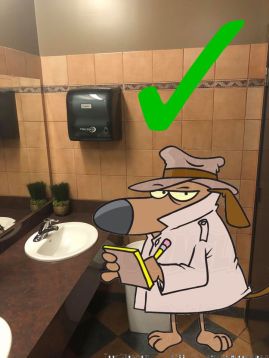 Speaking of drippage, they have a drain right underneath the urinal. I’ve seen drip-drains in restrooms before, but this one is exceptionally placed.

This is a great feature for any overflow or those guys who shake it off a little too enthusiastically. The people who designed this building must have collaborated with actual engineers and plumbers or something. (A practice that seems to be increasingly uncommon.)

The urinal itself is an American Standard Washbrook FloWise model. It’s fresh, free from leftovers, and fully functional. It has a sleek shimmer, as if being prepped for the Showcase Showdown on The Price Is Right.

I can see they replaced the manual flush-valve with a Toto TEU1GNB-12 EcoPower  Electronic Flush Valve with a polished chrome finish.

I’m sure I’m not the only one who thinks of “Africa” whenever I spot this little logo. The catchy song plays in my head as I bless the drains down in Zougla’s bathroom.

Alright, so far I haven’t found anything questionable in this place. The urinal doesn’t have a cake in it though, so I’m going to dock 6,000 points for that little discrepancy. Ha! Take that, high society. Time to check out the can.

I must admit, the finish on this stall is beautiful. While I’m sure that refined-types aren’t normally disposed to graffiti, it’s apparent that even the everyman withholds his urges out of respect for such a lacquer of subtle richness. No latrinalia in sight.

The toilet looks clean. The Paper is stocked. Looking good—but wait! There’s a garbage can next to the toilet with no bag inside!

What do these guys think? People are just gonna throw their garbage into a cold black empty bin of nothingness? What do they think we are, primitive cavemen? This is Zougla, damnit!

Then again, I guess Zougla could also be caveman name.

On my way outside of the stall, I notice something on the wall. Aha! It appears that Zougla hasn’t replaced their air freshener in time for me—the great restroom dick. Er, detective.

Maybe somebody stole it? After all, it was probably a really fancy-ass air freshener with time-release emissions made from mountain-spring water and sweet supermodel sweat. Regardless, such an aberration loses them about 27,000 points.

Aside from that, there are next to zero anomalies in this restroom. The sinks are clean, the soap smells great, and the Complete Paper Towel Dispenser is so middle-of-the-road that I was practically praying for it not to work. (Hey, I’ve gotta find something wrong with these places I write about).

Yes, the staff and management have done a good job at preventing a poor review from a penny pinching prig such as myself. I am very pleased.

The next time I decide to skip having food in my fridge for a week, perhaps I’ll find myself at Zougla again. Being from Alberta, it’s hard to find a place where the steak is up to my snobby prairie standards, and these guys undoubtedly make the cut. Thank you Zougla, for your succulent food and sanitary toilet-seats.

And in case you have “Africa” stuck in your head now, I wrap up this review by providing you with a shortcut to the 1982 super-hit. Without a doubt, there’s definitely a Zougla in Africa.