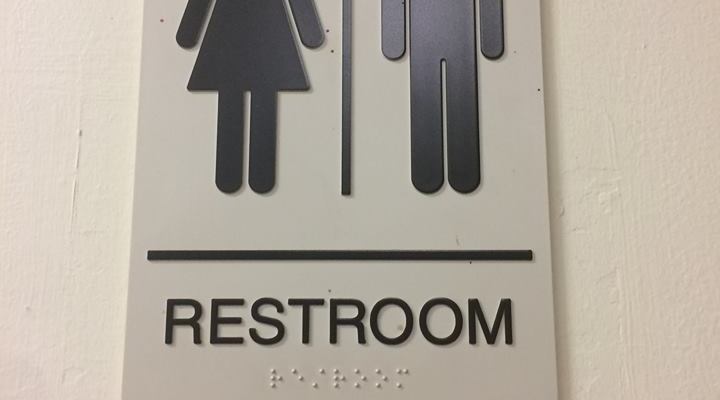 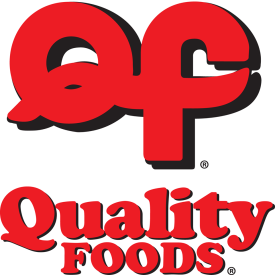 While I don’t have any loyalty toward any grocery store, I do have a pretty good idea of which ones to go to for particular items. For example, if I want to wrestle with a wobbly paper bag on my way back to my car, I’ll go to Thrifty’s. If I want wax-tasting fruit, I’ll go to Superstore.

As for Quality Foods at University Village, they seem to be pretty decent in the meat department. Having good meat is important in any relationship, especially the one you have with your grocer.

I’ve always enjoyed the “QF” logo for Quality Foods, because if you pronounce it phonetically, it sounds like a queef. Would their restroom fragrance live up to the logo’s promise? I stopped into Queef’s for a whiff.

My journey begins with pushing myself through warehouse-style doors. The type that grocery stores typically don’t want you entering.

Right off the bat, I’m thinking Quality Foods should be commended for their transparency.

Customers get a chance to sneak a peak at the guts of the store, even if it’s just to empty their own.

I suddenly feel someones eyes on me. I guess it’s not every day that the staff here see someone snapping photos of their restroom signage. I smile at him. He avoids eye contact. Pfft.

After turning the corner, I am led to a lovely arrangement of barbecues and a post-modern, multi-level design concept! Very chic. The red chair would be fantastic for time-outs and general perching.

There is also an apron hanging haphazardly on the fire-escape door. And while I’m sure it’s for the grills, I can’t seem to get the image of Leatherface out of my mind.

I’m kind of hoping that the staff occasionally gets into a few bottles of cooking wine and decides to re-enact The Texas Chainsaw Massacre.

Now, I don’t usually review women’s restrooms, but in this instance, the door is left wide open. Just by taking a quick glance, I can see something is off. Literally.

Yes, as it turns out, a patron was apparently having some bad luck with the toilet, and decided to take matters into their own hands.

Some of my most suspenseful moments in life have been immediately after flushing a toilet. Watching the water swirl slowly downward, praying for it to thirstily gulp the entirety of my septic shame.

In a worst-case scenario, you either stand your ground or abandon ship.

Kudos to this woman. She probably went elbow-deep into that terrifying tank, making damn sure not to leave anything behind for the next person. (Aside from some mildly disgusting light-duty labor).

Okay, time to check out the men’s room, located right next door. And as far as doors go—this one is pretty sliced up.

The general appearance inside isn’t great: dents, scrapes, and stains. There’s also something that looks like ink on the soap dispenser. I’m not sure if they have a printing press back here, but this bathroom is giving me an oil slick vibe. They aren’t shy about letting you know that their restroom is shared with employees.

Piss is never pleasant. Reviewing restrooms, I’ve seen some pretty bad puddles. And while it makes sense to find some piddle-juice around the floor of a fixture, it’s pretty disgusting when it’s pooled outside of any conceivable radius of stream-to-bowl common-sense.

In other words, this guy didn’t even fucking try. And his personal brand of Five Alive is starting to ferment. Get a mop, guys.

The sink and faucet are relatively clean, which is always nice; but doesn’t take much concerted effort to accomplish.

This toilet lid, though. Ugh. It sure does look sad. Thankfully, the grime isn’t sunny-side up. Still, knowing what would be caked so closely beneath my butt would deter me from making cheek contact.

In the corner of this restroom, there are also some empty shelves that seem to be ready for bathroom décor.

Since Quality Foods seems to be quite an advocate of sharing, I feel management should embrace this concept further.  Let it be known that what’s theirs—is also ours by encouraging staff to bring a few personal items from their own homes! (The didgeridoo is excellent for noise cancellation!)

In the toilet paper department, they’re running dangerously low; however, they do have a pretty new looking Kruger Mini-Titan² Touchless Roll Towel Dispenser!

This  model is a personal favourite of mine. With its easy-pull system, it allows me to disrespect mother nature even more after just wasting 3.6 gallons of her clean water on my own feces.

Okay, so this washroom does attract a variety of visitors, so it’s probably a pain to keep it up to par. Fair enough.

However, if you are  going to invite your customers into the depths of your (well-oiled) capitalist machine, you should ensure that the muscle behind the machine isn’t putting holes in the walls.

Not great, but not terrible. Additionally, no remnants of bodily function fumes were detectable. Having said that, I’d like to personally thank Quality Foods for providing a safe space for all of our QFing needs.

Now here’s the 1993 music video for Jamiriquai’s “When You Gonna Learn” to compensate for my environmental recklessness.  This helps, right?

One thought on “The sharing spirit of QFs”